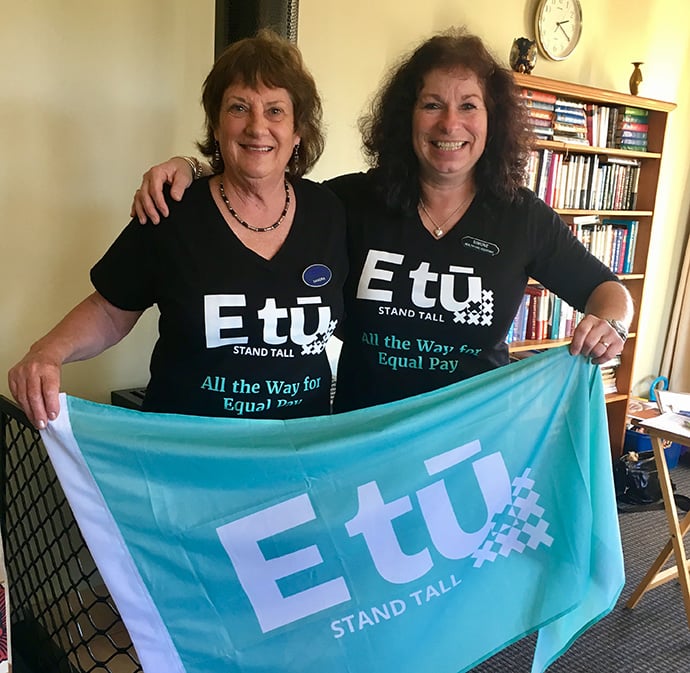 It was a huge undertaking, but E tū members did it!

Together with our member leaders, your union met with thousands of care and support workers to ratify the equal pay settlement. The meetings resulted in almost 2000 new members joining our union – a fantastic result.

A huge thank you must go to our army of member leaders, among them, Wairarapa delegate Simone O’Connor.

“They were great meetings,” says Simone. “It was such a terrific atmosphere!

“Everyone was so positive and pleased and talking about what they could do with the money, like going on holiday, visiting the dentist, or upgrading the car – things they couldn’t think about before. It was very special. I was sad when they were over!”

Meanwhile, our members are still getting used to the difference the settlement makes to their pay.

Auckland carer, Lumanai Penesa, says when she saw her first full fortnightly pay slip after 1 July, she could hardly believe the figure was correct.

“It came as a big surprise to me,” says Lumanai who works at Gracedale Care Home.

“It’s a lot. After all these years of being underpaid, we made it and we won! It’s great news for me. It’s peace of mind.”

Lumanai is now looking forward to her first family holiday in years.

“Me and my family, we never travel out of Auckland. Now I’m making plans. I’m always driving these old, old cars. Now, I’m going to buy a good car so I can take my family away at Christmas time and during holidays, just explore the rest of New Zealand.”

Lumanai says the new pay has also transformed how she feels about her job: “It makes us want to come to work, knowing you can bring home good money. It just helps us with a lot of things.”

“I need the power on, so I’d rather pay for that,” says Nellie, who earns about $500 a week after tax for 35 hours work – rostered over just three days.

“I don’t think I should be working these long hours,” she says. “I wouldn’t need to if our employers could fund equal pay.”

Nellie is among the mental health support workers who lodged an equal pay claim with the Employment Relations Authority in June.

Nellie says mental health workers earn too little and they are now working longer hours and more shifts than ever as their co-workers move to better paid care and support jobs covered by the equal pay settlement.

“It’s marvellous what’s happened to them but it’s just not fair,” says Nellie. “Our bosses can’t attract replacement staff and we are working longer hours.”

DHBs started paying some mental health employers extra money to keep and attract staff, but the Ministry of Health has told them to stop, despite the escalating staffing crisis.

A former Christchurch mental health worker, who can’t be named due to contractual issues, says the situation means some providers are no longer accepting additional mental health clients.

“The mental health staff are dropping away, so what happens to providers when they have no one to run their houses?”

She warns this will mean more admissions to already overflowing hospitals.

E tū is urging the Government to deal with the crisis by funding equal pay for community mental health workers.

Equal pay campaigners have targeted the Government’s equal pay bill, saying it puts too many hurdles in the way of pay equity for women.

Last month, your union joined other equal pay supporters to rally against the bill with both Labour and the Greens committing to the bill’s withdrawal and replacement if they are elected into Government.

For mental health support workers, the bill would nullify their pay equity case and they’d have to start from scratch.

“It will make it tougher for us,” says Auckland mental health support worker, Sandra Rawenata, who spoke at last month’s equal pay rally in Auckland.

“It means a lot more work, a lot more campaigning and another five-year process before we ever see equal pay,” says Sandra.

“We wouldn’t have achieved the care and support equal pay settlement under this bill, so we want it withdrawn,” says Marianne Bishop, E tū Women’s Committee Convenor.

Marianne says members need to send this message to their MPs.

“Go and talk to them. They vote on this – we need to let people know that we, as workers, don’t agree with it.” 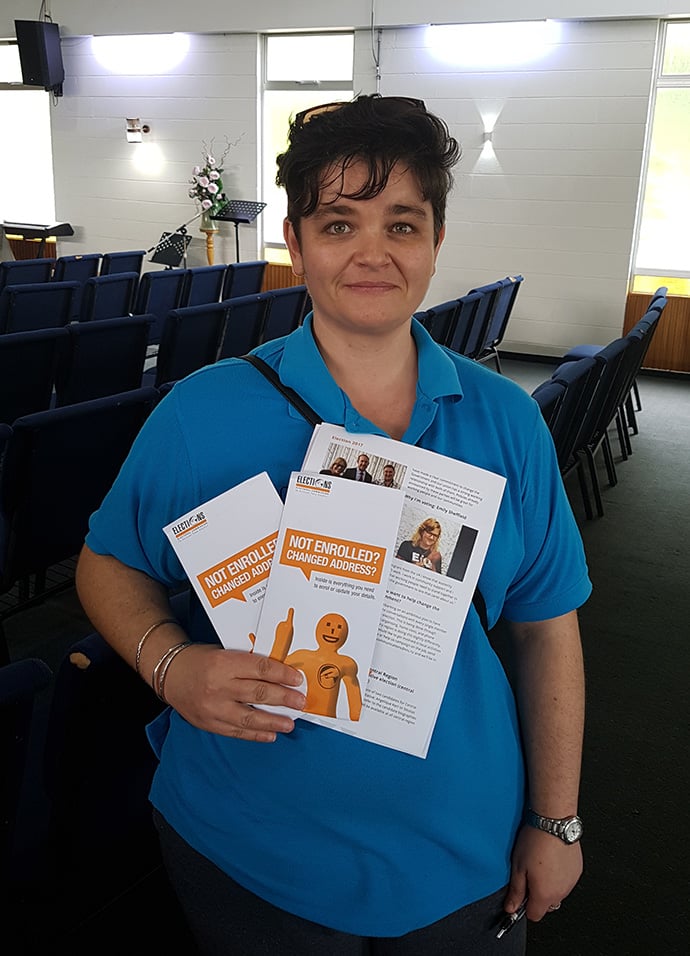 Our Biennial Membership Meetings in August were a hit! This is the first time E tū has held meetings for all members up and down the country – with over 200 meetings nationwide.

Members gathered to discuss our victories in E tū campaigns, our strategic goals and next steps. We were proud to report on the growth of our union membership since launching, breaking the trend of declining union membership in New Zealand and around the world.

A big focus of the meetings was our commitment to change the Government at this election. Union members voted to endorse E tū’s plan to help elect a Labour-Greens Government by getting members involved in the election campaign.

“I found the presentation very clear, straightforward and informative – the whole thing was very good and I’m pleased I came,” Tracie said.

“It’s good to know about the political and election stuff. Until this meeting, I didn’t realise we’re supporting parties that are for the collective good like Labour and the Greens. I hope other members go to these meetings every time.” Members in Hastings at their Biennial Membership Meeting 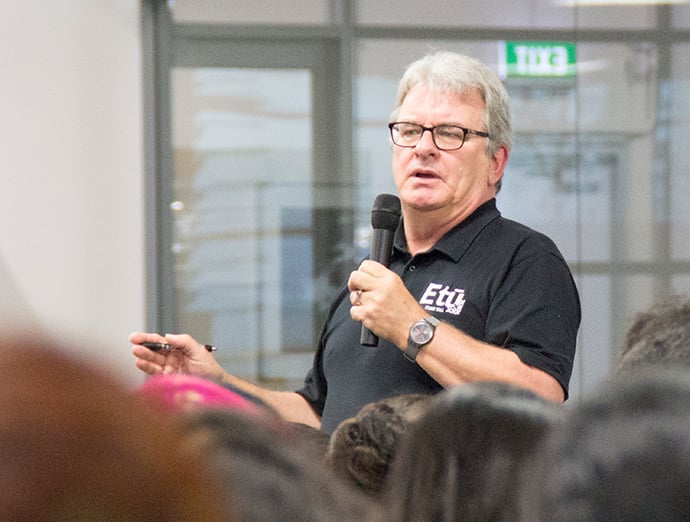 Welcome to this edition of our union magazine. You will notice that we have a lot to say about the General Election to be held on Saturday 23 September.

Some people say unions should focus on achieving good wages and conditions for members, standing up against unfairness and inequality at work, ensuring health and safety, advocating for high quality apprenticeships and skill recognition, and advocating for working people to have a say in their workplaces.

They are absolutely correct. However, our ability to effectively achieve these things for our members is subject to, and fundamentally directed by, policies and legislation of governments.

We have all seen the negative results of government policies that have shifted the balance completely and unfairly in favour of employers and against working people and their unions, undermining our ability to ensure secure dignified jobs and a fair distribution of the wealth that we create at work.

As a strong, relevant and influential union of the future we have a responsibility to our members to be politically engaged and involved so that we can ensure better workplace laws.

Of course, our delegates and members understand that and that is why we had such resounding support for our general election strategies across our recent round of delegate forums and membership meetings.

We lead the debate for policies that are most likely to create high quality, secure and well-paid jobs for all Kiwis. Employment policies must be a key topic in this election.

The National-led coalition Government will try to argue that they have been successful in creating jobs. Therefore, it’s important that voters know the facts.

Statistic NZ’s Household Labour Force Survey defines employment as ‘any work for pay or profit for one hour or more in a week’. Yes, there certainly has been a trend towards minimum-wage, temporary, part-time casual work and it shows.

Our inequality gap is widening, the richest 10% of Kiwis now own 40% of our wealth while the lower 40% own just 3%. Is that fair when the skills of working people help create that wealth in the first place? Even the International Monetary Fund and World Bank regard increasing inequality as a threat to world economies (and that unions are an important part of the answer).

Real wages have stagnated and have not kept up with productivity. The problem is not productivity – it is how wealth is distributed. We need better laws to support fairer wage bargaining and we need better high-quality jobs as a foundation for sustained growth.

The fact is that a Labour-Green Government is our best chance of better policies for a fairer workplace.

Labour cannot form a government without a strong coalition partner. I appreciate some E tū members in carbon-linked jobs are concerned about Green Party policies and that’s fair enough. That is exactly why we need to engage and influence them towards policies in government that recognise and protect jobs and communities, and ensure fair policies for a Just Transition to the new industries of the future.

As a union official and National Secretary, I have always been careful to respect the political views and democratic intentions of our members.

It’s also important to stand up and speak out for what is right. We need a better government with better policies for working New Zealanders. A Labour-Green Government is our best chance of achieving that. Let’s use our vote wisely for a better future on 23 September.

Thank you again for being an E tū member.

E tū’s Member Advantage programme is changing all the time. It has recently been upgraded again to include great deals for E tū members from Vodafone.

E tū members have already enjoyed exclusive savings on accommodation, airline lounge memberships, package tours, insurance services and more. These services are available to members and their families to use all year round, and can be accessed via the Member Advantage website: www.memberadvantage.co.nz/etu

Every two years the National Executive appoints delegates to serve on our eight Industry Councils. It is now calling for expressions of interest from delegates who wish to be considered for these positions.

Industry Council members represent the members in their industries, advise the National Executive on key industry issues and help implement plans and strategies to grow the membership.

Appointment is on experience, background and knowledge of the industry, union service, seniority, and other criteria set by the National Executive.

If this sounds like you please e-mail E tū Industries Director at [email protected] by 4pm on Friday 24 November with your name, your industry, and your relevant experience and knowledge.

The National Executive is considering appointments for two-year terms on the E tū Trades Reference Group, which advises the Executive on matters to do with trades qualifications, skills and any regulatory matters governing the work of tradespeople.

Should any tradesperson want to be considered for appointment to the Trades Reference Group they should email [email protected] by 4pm on Friday 24 November.

All members are now covered by a $1,500 Accidental Death and Dismemberment Benefit, including $500 spouse coverage and a further $500 coverage on dependent children. This is an automatic membership benefit of belonging to E tū.

Members must return an AIL reply card or reply online at ailing.co.nz/request  in order for an AIL representative to deliver your certificate of coverage and explain additional insurance coverage available. If you did not receive a reply card, please call the freephone number listed below. This is very important to you and your family.

Members also have the option to increase their coverage an additional $10,000 which costs just $2 for the first year.

Please note: to qualify for the $10,000 of additional ADB coverage, an AIL representative must visit you, obtain an enrolment form and collect premium for the first year. You may renew annually for $5.