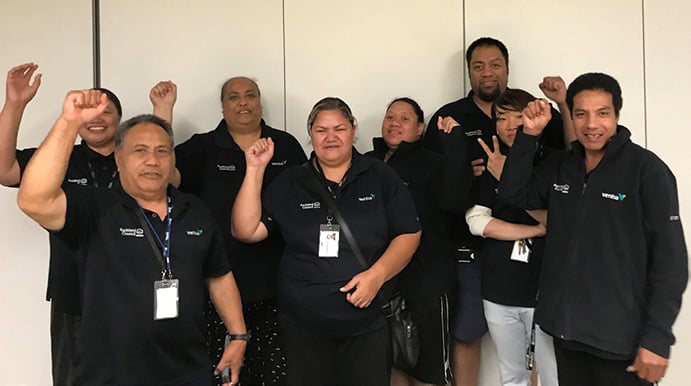 Malia, centre, with her co-workers

Malia Lagi, delegate and Auckland Council cleaner, helps clean the 13 floors of the Auckland Council building, including Mayor Phil Goff’s office. As a council contract cleaner, she earns just above the minimum wage. By contrast, her directly employed council workmates all earn at least the Living Wage.

“We clean each floor, day and night.” Malia says. “We do the same job as other cleaners but they earn the Living Wage and we don’t. It’s not fair. Our pay is not enough for our families to live on. That’s why it would help my situation if we had the Living Wage.”

At the launch of his 2019 election campaign, Mayor Phil Goff said a Living Wage for contracted workers was on his agenda for the next term.

With local body elections this year, the Living Wage will again be a campaign focus for E tū right across the country.

Malia says costs are rising, and like all parents, she wants to be able to support her children’s education and maybe even own a house one day. She’ll be out campaigning for and promoting candidates who support the Living Wage for council contract workers like herself.

“It is important to get out and to campaign for that. I will be happy to do that, to push more, to make people think about what we need.”

Seashore Cabaret in Petone, Wellington, a new accredited Living Wage Employer, hosted this year’s announcement of the 2018/19 Living Wage. The Living Wage has risen to $21.15, an increase of 60 cents.

It’s good to see another hospitality employer joining the list, as this is an industry which generally pays very low wages. These businesses are among the loudest critics of increases to the minimum wage, though they also complain they can’t find staff. Spot the connection!

By contrast, Seashore Cabaret workers earn the Living Wage, helping the business with attracting and retaining staff, along with other benefits. The owners also say they’ve made a profit from day one. It’s something other businesses could learn from.