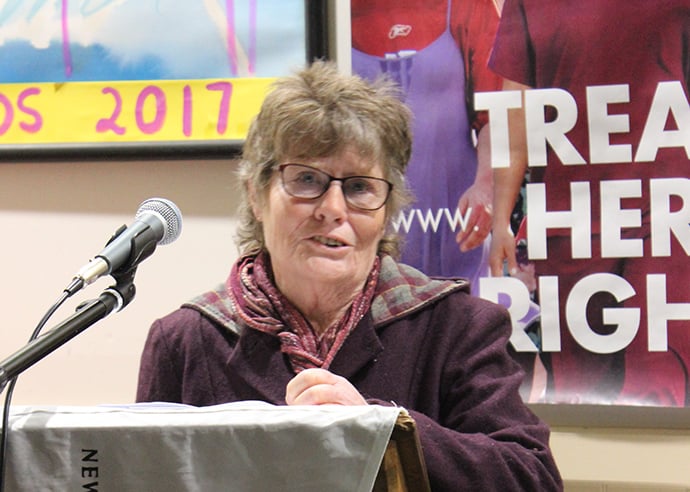 The Council of Trade Unions has honoured two E tū women leaders at an awards ceremony at the CTU Women’s Conference in July.

Former respite carer, Jan Lowe, was honoured for Leadership and Commitment to Equal Pay, in recognition of her long court battle for respite carers, which went all the way to the Supreme Court.

”It’s unjust and it’s the Government that’s doing it. They are colluding and allowing people to be paid way under the minimum wage, and getting away with it,” says Jan.

Winning the case would have paved the way for minimum employment conditions including the Minimum Wage as well as entitlements such as holiday and sick leave.

While two judges found she was a homeworker, three decided she wasn’t, costing Jan the case – and justice for respite carers. While the union has not given up on this issue, the judgement has been bitterly disappointing for Jan, although she pays tribute to her Union’s support and the union women she met at the CTU ceremony.

“It was lovely, and the energy of the women in that room! I haven’t been anywhere like that for a long time and I so appreciated and enjoyed being a part of something like that,” says Jan.

Also honoured by the CTU was E tū’s new Bay of Plenty organiser, Bertie Ratu. July’s big storm left her stranded in Tauranga, though she watched the presentation via Facebook Live.

“I was totally over the moon,” says Bertie. “I must say I did shed a tear when I was watching it being live-streamed. I just felt so chuffed. I was so excited and so happy, all these emotions… I just thought, “far out!”

Bertie’s award is for Outstanding Service to Union Women, for her work as Shed Secretary for the Meat Workers Union at AFFCO Talley’s Rangiuru plant.

Bertie fronted many battles, on picket lines and in the courts, as Talley’s tried to get rid of her and other union members. Through it all Bertie worked to rebuild the membership on-site.

“They thought if I can do all this, being put in the tripe room, being demoted and the loss of wages, if I’m still hanging in there, so can they,” she says.

Bertie says she misses her old workmates, and they still catch up but, in the meantime, she’s embraced her new role with E tū.

“I love it, no two days are the same – it’s always different,” she says.