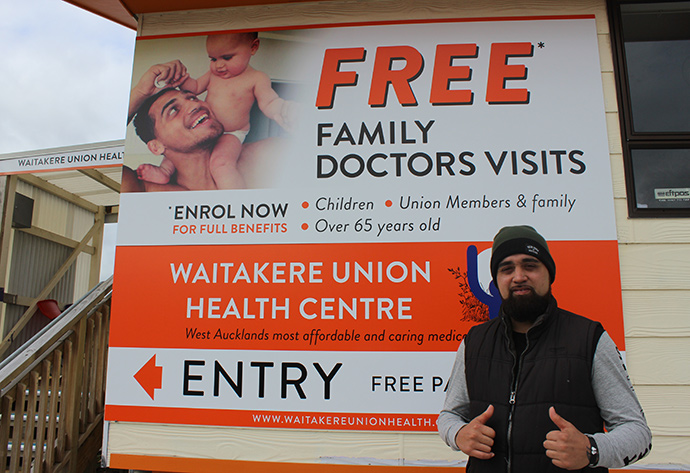 When E tū delegate Chelsy Waititi learned about the Waitakere Union Health Centre and its free treatment for union members, he signed up straight away. Appointments are also free for children under 18 and people 56 and over.

Chelsy had paid a lot for one doctor’s visit and realised the benefits for his family of four, including his fiance, their daughter and his mother-in-law.

“I’m pretty sure it was around $80 just to register and get the appointment, so being a union member was free and you know, that’s money saved in my pocket I can use for other things, like groceries and stuff like that. So it’s very important,” he says.

Chelsy is now spreading the word about the Waitakere Union Health Centre, which is a Living Wage Employer, to his workmates.

“Being a union delegate, that’s part of the job – giving them information on places like this. It can help them a lot financially.”

Now the centre, which was founded in the 1980s, is in expansion mode.

”We’ve got six-and-a-half thousand people on our books but we want more because we’re aiming to go completely free for everybody,” says Head Receptionist, Naomi Fleming.

“We’re looking at eight-and-a-half thousand enrolments for that to happen,” she says.

The centre is actively seeking registrations by visiting large employers locally, including major supermarkets and the Warehouse.

“We’ve been doing well,” says Naomi. “We’ve had so many enrolments it’s getting up there. We’re handing out brochures, doing flu shots. There’s word of mouth starting to get in place.” If you’d like free GP visits – and much more besides – contact the centre and arrange to register.

The Health Centre operates as a WALK-IN clinic.
Please be there before 4pm to see a doctor.

To register, you will need: