This month Taranaki hosted the inaugural Just Transition Summit, marking the beginning of a national debate on the pathway to a low emissions economy. Ahead of the Summit, our Taranaki members helped shape the debate in the region, where oil and gas have long underpinned the local economy, supporting jobs and a host of businesses and industries.

“Oil and gas have been good to Taranaki. It’s been good in terms of work. Now it’s about providing a good future for our kids. It’s about my grandchildren, that’s where I’m coming from.”

As a soon-to-be first-time father, delegate Sean Hindson also feels an urgency about the future.

“Oil and gas – we still need it for the moment. But that will change,” he says.

“We’re still in a talking phase, but I’m looking forward to some substance coming out of that and I’m hoping all of our work will be taken on board. Wouldn’t it be amazing if we were trailblazers globally and people took this and ran with it? It’d be brilliant,” says Sean. 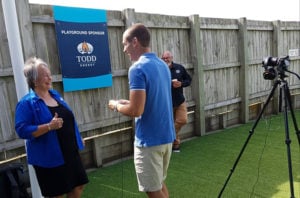 Tyrell Crean, local delegate and Central Region Representative for E tū’s Youth Network, also reports a positive mood in the pre-summit workshops and community hui: “They all want change to happen and it’s good to see all the positivity. There are young people involved and there will be heaps of support for this to continue. There are a lot of good ideas about what should change.

“People are thinking about the future,” he says. “As mentors, we’re the ones who have to drive it for the next generation. I want it to turn out well for my kids.”

Toni is a big believer in a few simple things done well, like public transport for school kids, so there are fewer cars on the road. “Normally it takes me 20 minutes to get to work. During the holidays, it’s ten minutes. And there’s usually just one child per car.”

For Tyrell, a priority is a more flexible and affordable industry training system. He says cost is a huge barrier to education and training.

“At the moment if you want a new pathway, your job turns into a training wage and that stops people. It comes down to money and if it’s affordable, people will do it.”

Sean says the debate is unlocking people’s imaginations. “This Just Transition thing, I love it.
I love being part of it,” he says.

All of our delegates agree that we can’t keep doing things the same way we have been for decades. “It’s just not sustainable,” Toni says.