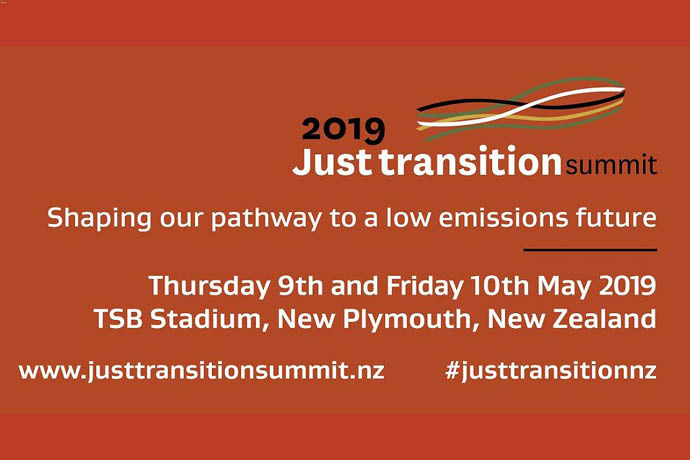 Eventually, all of us will have to confront the fact we have to act on climate change. In Taranaki, they’re doing that sooner than most. For months, the community has been encouraged to take part in hui to debate what a pathway to a low-emissions economy might look like.

It’s a radical change and no easy ask in a province prosperous from oil and gas, and another key carbon emitter, dairying. Agricultural chemical production is a big local industry. These industries under-pin thousands of jobs and hundreds of firms.

Taranaki is the pilot for how the rest of the country responds as we re-gear our economy to reduce emissions and combat global warming.

The Just Transition Summit in New Plymouth this week will explore how we get from here to there, built around the korero all over Taranaki this year on practical responses to this challenge. E tū has been proud to be a part of this, with our delegates joining other workers, local businesses, councils, iwi and the wider community in this work, which must be among the most comprehensive consultation exercises in recent times. But then there’s a lot at stake.

The pathway mapped out for Taranaki will be the pilot that guides similar initiatives nationally. It will be a bellwether for how the country manages the change from a carbon-driven to a carbon-neutral economy by 2050.

E tū has an 8-strong team of delegates attending and despite the huge challenges, the delegates say the mood in Taranaki is positive.

“The local community is embracing the Just Transition message,” says Toni Kelsen, E tū delegate and energy consultant. “Oil and gas have been good to Taranaki. It’s been good in terms of work. Now it’s about providing a good future for our kids. It’s about my grandchildren, that’s where I’m coming from.”

Tyrell Crean, local delegate and Central Region Representative for E tū’s Youth Network, also reports a positive mood in the pre-Summit workshops and community hui: “They all want change to happen and it’s good to see all the positivity. There are young people involved and there will be heaps of support for this to continue. There are a lot of good ideas about what should change.

“People are thinking about the future,” he says. “As mentors, we’re the ones who have to drive it for the next generation. I want it to turn out well for my kids.”

Protecting the future and securing decent work in their region are key priorities for our delegates. Changing energy use and farming practices mean the future of work is about new kinds of jobs and constant upskilling.

Tyrell Crean says there’s been a lot of exciting ideas ahead of the Summit about improving access to the on-the-job experience, education and training that people will need to adapt to the new world of work.

He says one workshop explored the idea of companies offering workers the chance to try a new job and learn a new skill. He says inter-linked companies was one idea for expanding job options and experience. But he says there are obstacles to that kind of flexibility and cost remains a huge barrier.

“Why not have a system where instead of one job, you can work in a different part of the company; where you can switch over, get trained and not lose money. Because at the moment if you want a new pathway, your job only pays a training wage and that stops people. With training and education, it comes down to money and if it’s affordable, people will do it.”

Toni, Tyrell and Balance Nutrients delegate, Sean Hindson also support better public transport.  It’s an obvious way to cut traffic but Sean says a good network would link the wealthy job-rich hubs of Taranaki with other parts of the region, so people had access to good jobs and training. He says it’s about reducing inequality.

“If you had decent infrastructure to allow youth and people in their 20s and 30s to commute around, and to connect those hubs of learning by trains, you could see the wealth shared around. So, I would say dream big.”

Indeed, some big ideas and cutting-edge science have emerged during the workshops ahead of the Summit. Sean says the debate has unlocked people’s imaginations. “This Just Transition thing, I love it. I love being part of it,” he says.


Sean acknowledges there will be many sceptics about what the Summit will achieve.

“People are always wary about that – you see a lot of sitting down and talking, people just chewing the fat. But I’m looking forward to some substance coming out of that. For now, we’re still in a talking phase but I’d be interested to see some solid data come out. I’m hoping all of our work will be taken on board.

“Wouldn’t it be amazing if we were trail-blazers globally and people took this and ran with it?