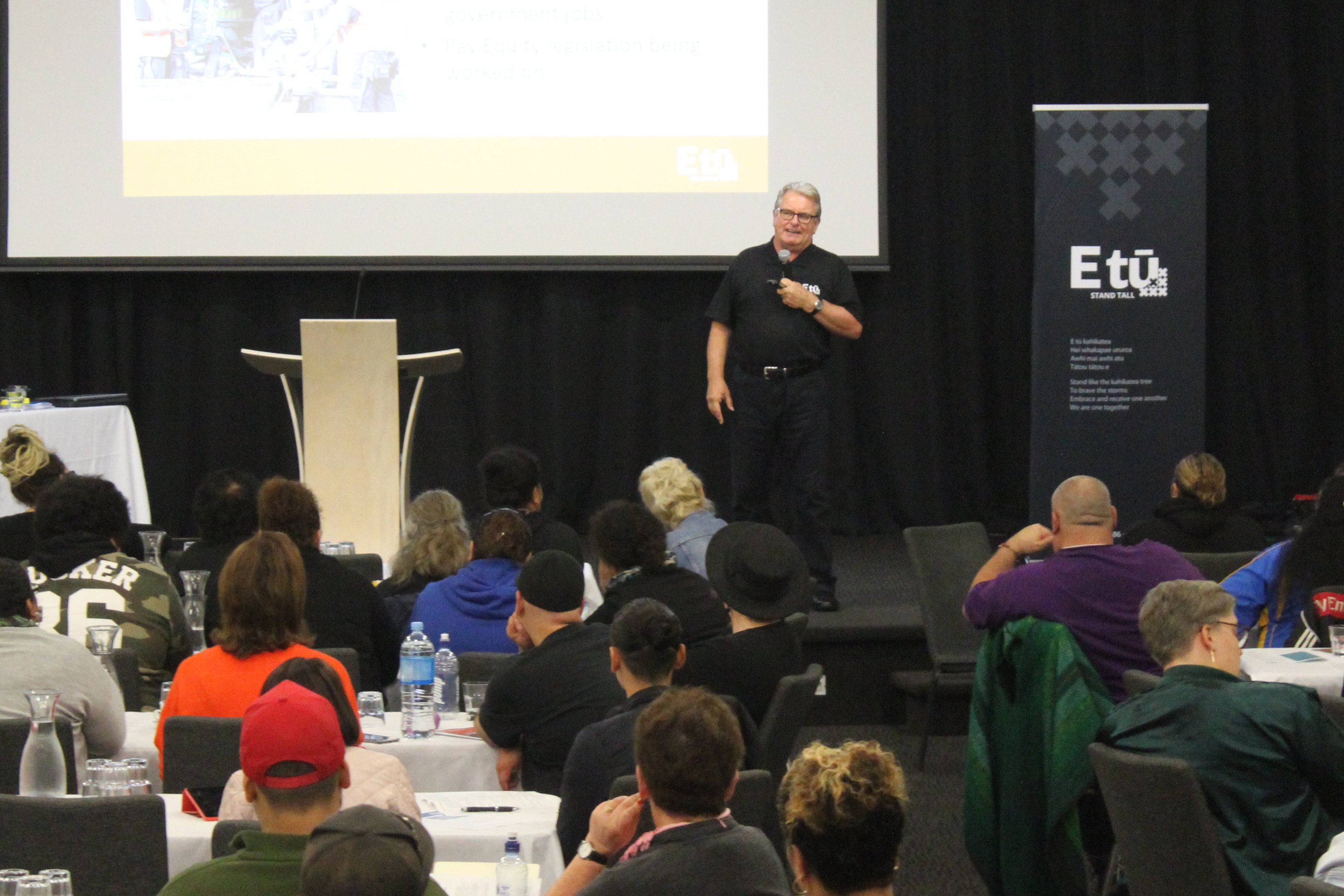 Jacinda Ardern is correct when she says the world is moving on towards lower-carbon emissions and away from dependence on fossil fuels. There are internationally recognised carbon change targets and New Zealand’s coalition government is committed to aligning with those and being carbon-neutral (achieving net zero emission of carbon) by 2050.

The coalition government has established the Independent Commission for Climate Change to consider a pathway of transition towards that carbon-neutral economy and society.

Even Cameron Madgwick, the Chief Executive of the industry body, Petroleum Exploration and Production New Zealand accepts the world is moving towards lower-emission fuels.

Many E tū members feel a deep sense of responsibility to ensuring a sustainable planet for their grandchildren.

However, many E tū members work in carbon-linked jobs and those jobs are potentially affected. Our members work in mining, gas exploration and production, steel and aluminium making, electricity generation and aviation.

Many other members work in engineering and services supporting these operations.  E tū members in the West-Coast and Huntly mining operations, at NZ Aluminium and NZ Steel, Marsden Point and in the on and off-shore Taranaki oil fields support their local community economies with wages and conditions included in good union employment agreements.

We stand up for those workers and their families and communities just as we do for all other 54,000 E tū members.

We know that Kiwi workers were the ones who paid the price for the economic and deregulatory transformation of the 1980s and 1990s; thrown on the scrap-head as their jobs disappeared or were replaced by low-wage, insecure work.  Our provincial regions in particular suffered.

We don’t stand for that.

E tū believes NZ should lead the way with a strategy of ‘Just-Transition’ in which we start planning now for the transition away from a carbon-based economy while ensuring that working people and their communities do not bear the brunt of this structural adjustment.

E tū is part of an international union movement, led by the peak global union organisation ITUC, that advocates for meaningful public and private sector strategies to ensure that good jobs and employment and income-related support is available as we transition out of carbon-linked jobs.

We call that a ‘Just Transition’ into new employment opportunities, and the work must start now on what is needed in such a Just Transition strategy. We can’t wait until it’s too late.

We are not interested in some plan that puts a couple more case officers in regional WINZ offices.  We need a strategy for new high-value jobs and other forms of support that are  real, practical, relevant, resourced and sustainable.

New Zealand can lead the way in this.  There are some promising examples overseas where unions have played an effective role in transitional strategies.  Germany and Scandinavia provide well known examples, but we can learn practical lessons from the transition from shale oil in Alberta, Canada and, closer to home, the framework of approach in the electricity sector in Australia.

We believe that the coalition government’s Climate Change Commission should have a central focus on employment-support related strategies and that this should start now.

That transitional pathway must also realistically consider the practical steps required to maintain our economic and employment capability serving our business and infrastructure as we work towards the target.

It is widely recognised, even by mainstream environmental groups, that natural gas is a lower emitter than thermal coal as a power source and that gas is a stepping-stone as we move away from thermal coal dependence.

Natural Gas is an important part of the strategy towards 2050.  It is needed to replace coal as the primary power source in industries like dairy production and as back-up for winter peaks in demand for energy production.  Gas is extensively used, for example, to power large boilers providing energy to manufacturing plant, hospitals, schools and hotels etc.

In New Zealand there is currently seven to ten years of permitted gas and oil exploration left. It is worth bearing that important role of gas in mind and allowing the Climate Change Commission to identify the real need.

Some will say that E tū is compromised in having a voice on climate change given we represent the interests of so many members in carbon-linked jobs.  We don’t shy away from that. It’s our job to stand up for working people. Miners played a key role in the struggles to establish a New Zealand union movement and a political voice for working people in parliament and we are really proud of that legacy.  Our members in mining, gas exploration and production live in communities that depend on their incomes.

But we understand and accept the challenges in looking to the future and we have a strong voice to offer on behalf of working people in the transformation to come.  Our bottom line is that we learn from recent history and ensure the interests of working people and their communities are paramount in that transformational journey.